Elliot Broidy is an example of money in politics gone mad and bad.

Elliot Broidy’s name is synonymous with DC sleaze. Despite being no neophyte it comes to public corruption, Broidy reemerged a couple of years ago as an ersatz Trump campaign insider. He attempted to profit from chuffed up political access and recently even from COVID-19, as reported in a recent article about his firm, Circinus Worldwide (formerly Circinus LLC) by The Intercept.

Broidy has a past. The former Democrat who later turned GOP bundler plea-bargained a conviction in 2012 for bribing New York State Pension Plan officials. In the plea deal Broidy had to pay $18 million in restitution and become a government witness, testifying against colleagues. The judge in that case even praised Broidy for his “zealous cooperation.” This would have sidelined the public life and political pursuits of most. But for Broidy it was just a pothole on the return road to skullduggery, but on a larger scale.

After resurfacing as a donor and a defense contractor with a new business called Circinus LLC (and now renamed Circinus Worldwide), Broidy emerged as an early Trump supporter. He leveraged his way into a slot as a Republican National Committee Co-Chair and joined Trump’s Inaugural Committee. He did so in plain sight, while portraying himself as an effective political bundler to real estate honchos, gaming moguls, and heirs to megabusinesses. In reality, Broidy took on a major lobbying effort selling the White House to anyone he felt could pay him for access.

Broidy’s efforts, captured in hundreds of email messages and documents, were leaked to the media. Broidy was in the thick of DC, it where his “fake it ‘til you make it” sales mentality thrived. He was finally exposed as an unregistered lobbyist for Saudi Arabia and various African, Asian, East European, and Russian interests. These groups sought to thwart criminal investigations, avoid sanctions, and otherwise gain access to the White House to advance their financial or political interests. There were eventual FBI raids, grand jury hearings, and even allegations of physical and mental abuse from a former mistress/Playboy model.

More on the mistress from The Hill, “The ‘model’ says Broidy began hurting her during their sexual relationship and pushed her to excessive drinking so she ‘would be more compliant toward his physical abuse,’ according to Bloomberg. In addition to accusing the GOP fundraiser of physical abuse, Shera Bechard alleges that the former RNC official also exposed her to herpes and emotionally abused her. She reportedly says he told her she couldn’t date or be seen with other men and that he also sought for her to depend on him financially.” What a guy.

Amid this melee of sordid activity there were editorials that attempted to portray Broidy as an innocent victim of media frenzy. And then, after the word blitz, silence. Broidy suddenly fell off the radar. Then it was discovered why.

As reported recently by the Wall Street Journal and the Washington Post, the Department of Justice was about to level charges against Broidy in connection with efforts to influence the US government on behalf of foreign interests. The specific rap? His role in a plan to coax White House officials to sink an investigation into Malaysian government corruption. He was implicated in other nefarious affairs as well. One notorious one regarding Angola. 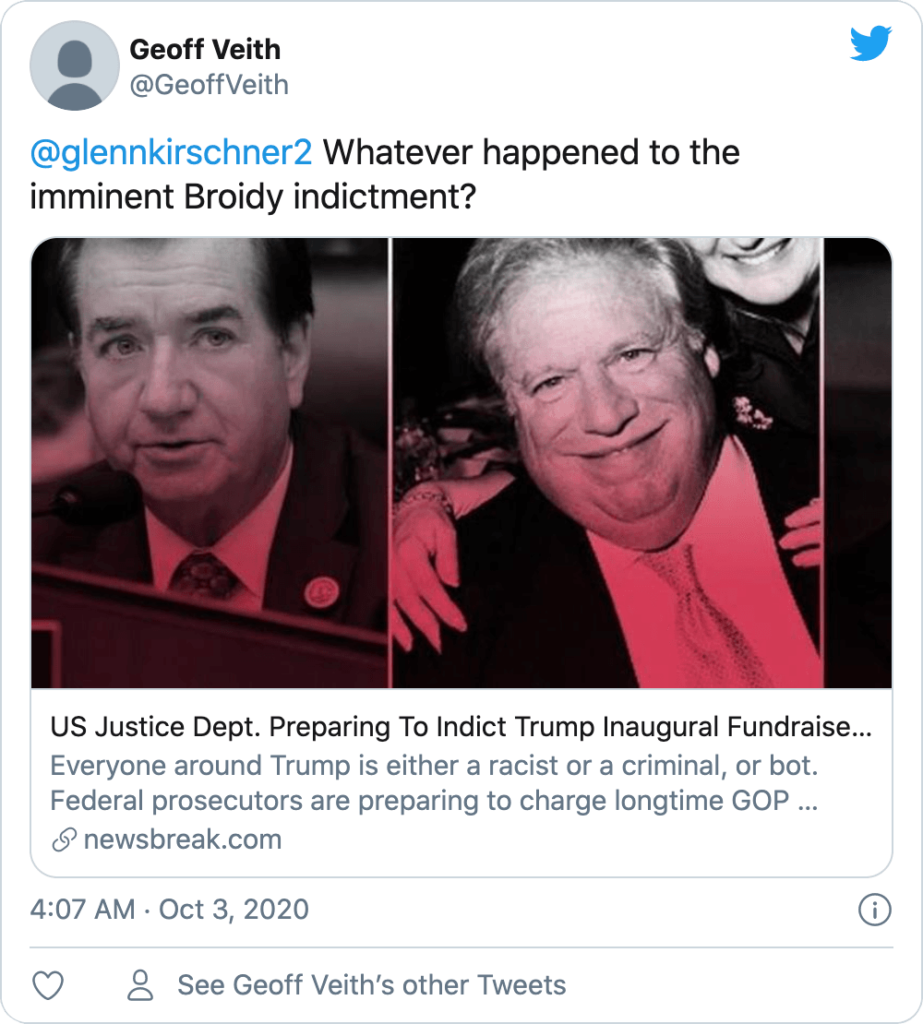 Fox News covered some of the allegations this way in 2019, “As provided to the AP, emails show Broidy invited two Angolan leaders named in the subpoena to Trump’s inaugural, and that the invitation was accompanied by a multimillion-dollar contract for Circinus to provide security services in Angola that Broidy asked be signed ahead of the events…In a follow-up note to one of the Angolans — then-Defense Minister and current President João Manuel Gonçalves Lourenço — Broidy discussed a planned visit to Trump’s Mar-a-Lago resort in Florida, and in the same correspondence demanded a past-due payment for Circinus’ services. ‘Many preparations have been made in advance of your visit,’ Broidy wrote in February 2017, ‘including additional meetings at the Capitol and the Department of Treasury.’ ”

Why should we care about just another corrupt DC swamp creature? Because, if the past is any indication, Elliott Broidy could once again escape justice. He may toss a few associates under the bus by striking another plea deal to again avoid a lengthy prison sentence. This is a maneuver all too common to the political class dating back forever.

All too often our system of justice is applied as a two-tier system; one set of rules for the elite and connected and another set of rules for everyone else. This is not the way our rule of law is supposed to work. Every American is guaranteed equal justice – blind justice – under the law.

Broidy has, by his disingenuous manipulation of the plea-bargaining system, made a mockery out of the US justice system, indenturing others to pay for his crimes as he returns to his sprawling, albeit rented, Beverly Hills mansion. That’s why holding Elliott Broidy accountable is important. Because the rule of law must be vital in our republic.