Where Do the Impeachment Hearings Go From Here? 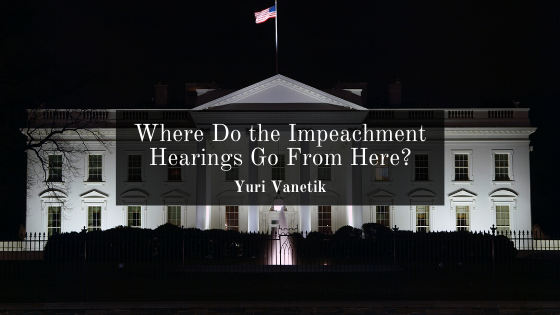 After receiving landmark testimony concerning President Trump’s actions with regard to US foreign policy on Ukraine from credible witnesses like Dr. Fiona Hill, William Taylor, and David Holmes, Congress finally appears set to move impeachment hearings forward to a new stage of development in December.

Over the next month, the House Judiciary Committee will hear testimony from legal experts that may shed more light on the foreign policy maneuverings of President Trump and his inner circle. At a time when political divisions are rife within the American electorate, these hearings could take on an aura of historical significance, but the likely political outcome of further witness testimony is anyone’s guess at this stage in the proceedings.

Clearly, Democrats in Congress are doing much to make their case to the American public that President Trump, his attorney Rudy Giuliani, and Energy Secretary Rick Perry intended to pressure Ukraine to announce an investigation into Trump’s main political rival Joe Biden. In exchange for dirt on Trump’s primary political opponent, Democrats argue, Ukraine would receive much-needed military funding for its fierce war against the Russian military. This scenario is the so-called “quid pro quo” that the Democrats’ case for impeachment hinges upon.

That case might be a very hard sell to a significant number of American voters who already back President Trump to the hilt, and it may be nothing short of a miracle if Democratic Party stalwarts like Adam Schiff and Nancy Pelosi convince Trump supporters like Mitch McConnell and Lindsey Graham to vote for impeachment in the Senate.

So far, the strategy in the House appears to be straightforward enough: Present compelling evidence for impeachment via a litany of testimony from credible witnesses, the thinking goes, and Trump supporters within the Senate will be all but forced to prosecute Trump over the coming year. But as an era of fierce political rivalries and hard-nosed political tactics swathes Washington in impenetrable clouds of political oneupmanship, that may be a very tall order indeed.

This is large because no President in recent memory has been able to shore up absolute support in party circles quite like Donald Trump. His adherents in Congress have not budged an inch since impeachment hearings were first announced, and Congressmen like Representatives Jim Jordan and Devin Nunes have been fierce in their defense of Trump’s actions.

Even when the facts have not been on their side, in fact, politicians like Jordan and Nunes have doubled down on conspiracy theories and mudslinging attacks on colleagues: Convinced that Ukraine was a shadow-force behind the Hillary Clinton email server scandal that first made front-page headlines in the run-up to the 2016 election, for example, Republicans appear to view the President’s actions vis-à-vis foreign policy as little more than stalled efforts to stymie corruption in Eastern Europe.

However, such theories took a battering in recent weeks as foreign service agents like Lieutenant Colonel Alexander Vindman painted a very unflattering portrait of Trump’s possible intentions with regard to Ukraine. A decorated war hero, Vindman was able to remain calm and collected as Republican members of Congress repeatedly attempted to besmear his character and patriotism. Vindman’s testimony was clear: Trump intended to extort Ukraine for his own political gain. At least for a time, Republicans had lost control of the narrative.

If Democrats can produce more witnesses like Vindman, they may just make their case for impeachment on a very grand scale indeed. No matter how compelling the evidence, however, convincing Trump’s most diehard supporters in Congress and in the American public at large of the need for impeachment may just be a bridge too far.